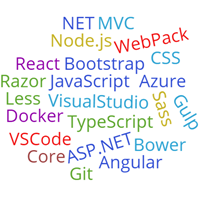 Today it's the first of December and this year I'm trying to do something I've never done before. I'm going to write an Advent Calendar. And each day from today to the 24th of December I'm going to write a short post with a tip, an extract, a code listing or topic from my upcoming book Front-end Development with ASP.NET Core, Angular, and Bootstrap.

The posts will be published around noon European time so that they are the first thing you see in the morning in USA time zones.

The book is made of 9 chapters plus introduction and preface, so it'll roughly be 2 days per chapter.

Today, as first day, the content comes from the introduction of the book, and is the reason why I decided to write the book. After changing job and industry (almost 8 years ago now) and moving from companies in the IT industry to an organization where IT is something to support the main business, I've seen a big difference in the type of developers: mostly were the so called "enterprise developers" which only knew their language and their framework of choice, but had little (or no) knowledge of the revolution that was happening in our industry, more specifically about the fast-paced evolution in the world of front-end development and integration with server-side development.

This is what pushed me to write this book. And here is an extract of that chapter:

What is a polyglot developer

In every-day life, a polyglot is a person who knows and is able to use several language: their are not necessarily bi-lingual (or multi-lingual) but they can use their second or third or fourth language with a good level of proficiency.

With that definition in mind, what is a polyglot developer? It's a developer who knows more than one (programming) language or framework and uses them within the scope of the same application.

From the beginning of IT industry, applications were mainly written in one language: I personally started with C, then moved to Visual Basic, landed on Cold Fusion, used JavaScript at its early stages, both on the client and the server, did a bit of Java and finally landed on the .NET platform, but only one at a time.

It was the time of the big enterprise frameworks, when vendors tried to squeeze into their language or platforms all the possible features than an application might need. Probably you all remember when Microsoft tried to shield web developers from the actual languages of the web, HTML and JavaScript, introducing ASP.NET WebForms and the ASP.NET Ajax Framework. And if you look back at your personal experience in the IT industry you'll probably find many other similar examples.

But lately a new trend appeared, which went in the opposite direction. The IT industry understood that maybe some languages are more suitable than others for specific tasks, and instead of trying to force everything on top of one and only language, applications started to be written in multiple languages.

And that was the beginning of the era of the polyglot developer.

If you are interested in learning how to become a polyglot developer using ASP.NET Core as basis, consider pre-ordering a copy of Front-end Development with ASP.NET Core, Angular, and Bootstrap and get it as soon as it hits stores.