My new free eBook is out: OWIN Succinctly by Syncfusion 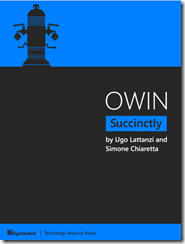 I’m happy to announce that my latest book, OWIN Succinctly, has just been released by Syncfusion, within their “succinctly” series of eBooks.

I’ve written this book together with my friend and co-organizer of the 2nd Web European Conference, Ugo Lattanzi, with whom I’ve also give a speech in Paris last May, still about Owin.

Owin is a big inspiration for the new ASP.NET 5 stack, so we decided to write this book both to show how you can use this “philosophy” with current version of the ASP.NET, and to let you know how it could be in the future with ASP.NET 5.

The book covers all aspects of OWIN, starting with a description of the OWIN specification, moving on to how Katana, Microsoft’s implementation of the specs, works. Later we also show how to use Katana with various web frameworks, how to use authentication and finally how to write custom middleware.

The table of contents is:

OWIN, and the new ASP.NET will be big actors in the 2nd Web European Conference in Milano next 26th of September, so, if you want to know more about those technologies, consider participating to the conference.

A big “thank you” goes to Syncfusion, for giving us the possibility to reach their audience, and to our technical reviewer Robert Muehsig, whose comments helped making the book even better.